Some medical problems may require removal of all or part of the thyroid gland. These are:

Thyroid surgery is very successful and safe when performed by a well-trained surgeon. Cooperation with an endocrinologist is extremely helpful to determine the appropriate procedure and for post-surgery follow up. 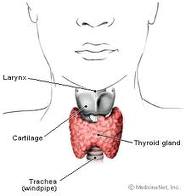 The thyroid gland, a shield-like organ at the front of the neck, produces hormones that help regulate the body’s metabolism. It has two lobes, one on each side of the trachea, which are joined at the base by a bridge of thyroid tissue called the isthmus.

The gland’s blood supply comes from two paired major arteries entering its upper and lower poles. It is close to two other anatomic structures: the recurrent laryngeal nerves, which control the vocal cords, and the parathyroid glands, which adhere to the thyroid gland posteriorly, two on each side, and regulate the calcium level of the blood.

The recurrent laryngeal nerve and parathyroid glands are at risk during thyroid surgery.

A two- to three-inch horizontal incision is made across the front of the neck, approximately one inch above the collar bone. The skin and fatty tissue covering the neck muscles is then mobilized and spread apart with retractors, and the muscles in front of the neck covering the thyroid gland (called the strap muscles) are separated in the midline and retracted to the side of the gland that needs to be removed, exposing it.

The blood supply to the upper pole of the gland is usually controlled by tying off the blood vessels with fine sutures and transecting them. The gland is then rotated toward the middle and the recurrent laryngeal nerve, which usually lies in a groove along the trachea, is identified and traced to its insertion in the voice box (larynx). The parathyroid glands are also identified and carefully preserved.

The thyroid gland is then separated from the trachea, the tissue between the two thyroid lobes is transected, and the gland is removed.

The whole procedure is repeated on the opposite side if the entire gland needs to be removed.

Removal of one lobe of the thyroid gland usually takes 60 to 90 minutes and requires a hospital stay of one to two days; an uncomplicated removal can also be performed as an outpatient procedure.

Most patients return to work in one to two weeks.  Many complain about some neck stiffness, numbness of the skin in front of the neck and mild difficulty swallowing, which usually subsides after four to six weeks. The operation leaves no permanent physical disability, and, after healing is complete, the scar is barely noticeable.

Recurrent laryngeal nerve damage, causing hoarseness and possible difficulty breathing, occurs in one to two percent of all thyroid operations, although it can be more frequent when the operation is performed for treatment of cancer.

The risk of permanent damage to the parathyroid glands following complete removal of the thyroid is between five and 10 percent, and this damage requires the patient to take calcium supplements for life. The body needs only one-half of one parathyroid gland to maintain a normal calcium blood level, so the loss of several parathyroids is usually well tolerated.

The risk of death from thyroid surgery is minimal, probably less that one in 1,000, and is usually caused by other medical problems, such as heart attack.