As with the standard Roux-en-Y gastric bypass (RYGBP) the Omega Loop mini gastric bypass (MGBP) works both by restricting the amount of food that can be eaten at any one time, and by altering gut hormones involved in appetite control.  MGBP was first used in the late 1960s but abandoned in the 1970s.  Today, because of developments in laparoscopic (“keyhole”) surgery, MGBP has started to come back into fashion and is being promoted as a quick and effective alternative to standard gastric bypass.  It is an operation that is gaining more recognition as a procedure for eradication of diabetes in insulin and non-insulin dependent patients.  Patient following surgery show immediate improvement of their diabetes, some coming off insulin within a few days post-surgery. 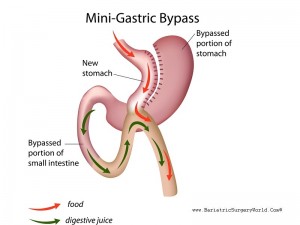 How is the operation performed?

In the first part of mini gastric bypass surgery the stomach is divided and a small tube of stomach created which becomes the pouch.  This is the restrictive part of the procedure and means that only a very small amount of food can be taken at any one time.

Next, the surgeon brings up a loop of bowel (between 150-200cm long) and joins this to the lower part of the stomach pouch.  (The joining of bowel to bowel, or stomach to bowel is called an “anastamosis”).  This means that food passes from the small pouch into the small bowel where it meets the digestive juices which have moved downwards from the main part of the stomach. In effect, therefore, about 2m of small bowel has been bypassed before absorption of food (and calories) can take place.  Fewer calories absorbed, means weight loss.

How does mini-gastric bypass differ from the standard bypass?

The main difference between the standard Roux-en-Y gastric bypass procedure (RYGBP) and the mini gastric bypass (MGBP) can be seen by comparing the two diagrams below.  It is clear that in the case of the MGBP there is only one anastamosis, whereas in the RYGBP there are two – an upper and a lower. Because of this the MGBP can be done in less time than the RYGBP and – at least theoretically – with fewer early complications.

Studies show that weight loss and health benefits resulting from mini gastric bypass are essentially the same as for standard Roux-en-Y gastric bypass. 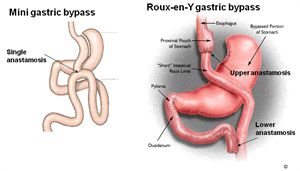